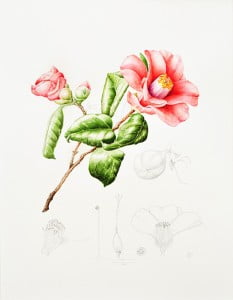 A keen gardener and orchid enthusiast, Kay loved painting and drawing from an early age. Initially focussing on landscape painting, she later developed a particular interest in plant illustration. After retiring from a successful career as a scientist working in the field of hazardous waste management, carrying out assignments as far afield as Antarctica, for which she was designated Special Envoy of UNESCO, she was able to concentrate on painting.

Kay was awarded a Diploma in Botanical Illustration with distinction in 2009 by the English Gardening School at the Chelsea Physic Garden, and became a HCPFS member the same year.