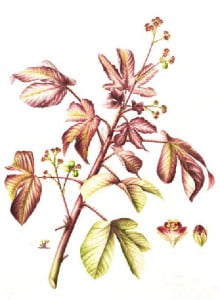 In 1989 Leigh Ann gained an honours degree in Design and Communication and pursued a career in graphic design. Being interested in botanical art, she took up flower painting in 1997 before completing the English Gardening School Diploma in Botanical Painting in 2004. She became a Fellow of the HCPFS in 2008. Leigh Ann contributed to the RHS group exhibit in 2009 where HCPFS was awarded a silver medal. She was independently awarded a silver medal from the RHS in 2015 at the London Botanical Art Show, and she was also awarded a bronze medal in 2013 at the Kirstenbosch Biennale, South Africa.

As well as her HCPFS paintings held in the Royal Archives Leigh Ann’s work features in the permanent collection of the Hunt Institute for Botanical Documentation, Pittsburgh, USA and private collections around the world. She is a member of the Nymans Florilegium Society in Sussex and the Sydney Florilegium, Australia.

Leigh Ann undertakes commissions and is a qualified tutor of botanical painting.