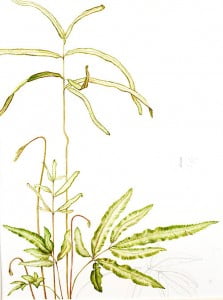 Penny originally trained as a teacher in Durham,(1969) and then retrained as a Calligrapher in Roehampton Institute,(1994). She is a Fellow of the Society of Scribes and Illuminators and an Honoured Fellow of the Calligraphy and Lettering Arts Society. She is Scribe to the University of Cambridge.

In 2013 she was awarded the Diploma in Botanical Art and Illustration, EGS (Dist.) and has continued to work both as a calligrapher and botanical artist since then.She is a Fellow of the Linnean Society, London, and is a Brother (!) of the Art Workers Guild, London.

Penny was awarded a Silver Gilt medal at the 2013 RHS London Botanical Art Show. Her paintings are held in private collections in the UK, Germany, Australia and USA.